This event challenges the serious power-boater’s navigation skills in a competitive but friendly environment. Participants discover just how well they know their boat’s performance characteristics at various speeds and how well they can predict the time it will take to travel each leg of a course in a variety of marine conditions.

The 2017 results are listed below: 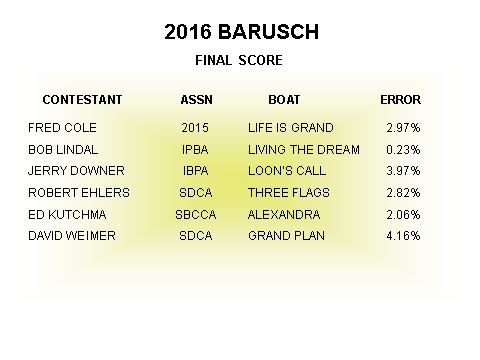 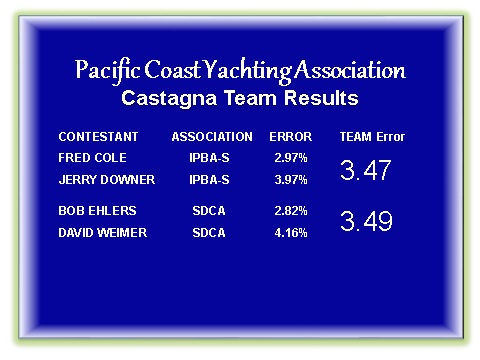 The 2014 Barusch-Castagna Predicted Log Regatta took place the weekend of June 20-23, 2014, at Elliott Bay Marina in Seattle and was co-sponsored by PCYA and the International Power Boaters Association of Seattle.  Edward Denaci, with navigator David Weimer, won the championship trophy aboard the powerboat, “Redemption.” Representing the San Diego Cruisers Association, skipper Denaci along with skipper Robert Ehlers and navigator Denis Sempsrott won the Castagna Team Trophy.  The team of Bob Lindal and Jeff Ewell of the IPBA were a close second.

The powerboats used are “loaned” to the participants during the three day event and there is a “draw” on Thursday evening to see which boat each contestant will use. On Friday, the contestant takes the boat out to determine speeds and how it handles. On Saturday, the contestant submits his or her estimate of their arrival time and then navigates the boat over the course. Competitors may not use GPS, radar, nor timepieces, and the event is a real test of seamanship. Complete 2014 results can be seen in this PDF document (opens in new window).

The 2013 regatta took  place at Del Rey Y.C. and California Y.C., on June 27-29. The hosting associations were the Santa Monica Bay Power Fleet and the Southern California Cruisers Association. The regatta scores are listed below.

This difficult event lets participants join with other boaters in developing good piloting habits and navigation skills. At the same time, it brings people together with those who share their passion for the water.